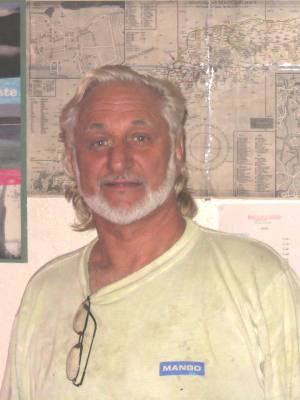 HENRY KOBY
There is a core group of long-time foreign residents in Dili who have brought changes to Timor-Leste whilst at the same time being changed themselves. Henry Koby has certainly left his mark on this town. In return he discovered that he had reserves of energy, courage and humour, enabling him to face the challenges of running an enduring tourism business in Timor-Leste on a shoestring. He was the heart and soul of Dili Backpackers in Mandarin, a simple hostel that has welcomed hundreds of pioneering travellers, making Timor-Leste a must-visit destination for any backpacker worth his salt. I remember him welcoming visitors straight off the bus from Kupang, who turned to him in their bewilderment for advice about how to explore this slightly scary outpost on the backpackers trail. He would shake his head, sigh at their unworldliness and, in his usual irascible way, devote hours to answering their endless queries, pretending to be impatient. Henry had endless patience. He was generous with his time. He had a soft centre. He knew the backpackers’ world, showed a genuine interest in travellers’ adventures – and occasional misadventures – and entertained them by offering an acerbic and usually humorous commentary on life in Dili. He consequently became well-known on the international backpacker circuit, featuring in countless travellers’ blogs, and will be missed by more people around the world than we can imagine.
When Dili was hit by the 2006 crisis, many expats who had spent years and fortunes setting up businesses and making lives for themselves in this country watched in shock as Dili burned. Backpackers were still turning up as youths fought on the street outside the gates. These were strange days. One night Henry drove rioters away with a spade as they tried to climb the fence into the hostel. Even though he was greatly outnumbered, he roared defiance at the intruders. They fled. Henry could be fierce.
During this period, Henry found work as an electrical contractor at the Heliport, newly occupied by Australian forces. I met him one day as he cursed security guards at the Heliport as they would not allow him to enter to do his work because he didn’t have a pass because he was self-employed. Dili was full of people with passes dangling around their necks: police, army, NGO’s and aid workers, who had been shipped in to deal with the crisis. But we expat residents didn’t “belong” to an organization. We just belonged to Dili. We decided that we, too, needed an identity as a group, a pass. So Henry became the first member of the LCC – The Local Characters’ Club – open only to those foreigners who had arrived in Timor-Leste before independence, investing our own capital, without a safety-net . The LCC pass had a photo and an official-looking crest. It worked for Henry and he never had trouble getting access to the work site again when he flashed the pass. It was a joke, based on his quirky sense of humour, but there was actually an underlying seriousness to the bond between Local Characters, who numbered only 20 or so. One of the club’s rules was that all Local Characters should help any other member who was in trouble, regardless of whether they were on speaking terms or not. Henry was always there for us when we found ourselves in a predicament. He would grumble, suck his teeth, and pitch in to help.
Henry had a narrow escape in 2006 when he unwittingly rode into a gunfight on his motor bike. A bullet passed between his arm and his ribcage, punching a hole in his T-shirt and leaving just a graze. He often joked about it. When his final illness was diagnosed, and he returned to Dili after months of treatment, he had us laughing as he told anecdotes about his time in hospital and how he tormented the long-suffering nursing staff. He told us that his illness had brought him face to face with death and that he felt serene about the end, whenever it might come; he was ready. He had also gained a new appreciation of life, a sweetness, a gentleness of manner. In sharing these experiences, I believe that he was saying goodbye to us and trying to diminish the grief that we are all feeling now. He was shy, he didn’t like a fuss. He loved Timor-Leste deeply. He told us that he wanted to be here at the end and I am glad he was. He belonged here. But without Henry, Dili has lost some of its flavor. He will be missed and fondly remembered.