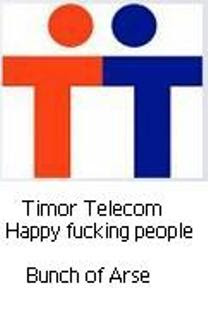 So, here's what happened.
I woke up at 6am on Friday and thought I'd play a bit of 'Mafia Wars' on the old internet. Unfortunately the old internet decided that 6am was a bit early for it so I couldn't get on line. Eventually, at 7.15am I managed to get through to Timor Telecon 'customer support' (no, thats not an oxymoron (actually it is)) and was told that a 'technician' may show up in "around 3 days"! I was also given a complaint number. After explaining to the lady at 'customer support' that the problem was probably with the Timor Telecon main frame we said our goodbyes.
After 7 more 'phone calls to 'customer support' a 'technician' (and I use the term lightly) finally turned up at 5pm. This chap then proceeded to check all my connections, making sure that in a sudden frenzy I had not disconnected anything, added anything, taken away anything or had not deliberately fucked up my own internet. He then decided that maybe my problem was with the landline and he would call his office to check said Timor Telecon landline. Unfortunately the Timor Telecon technicians Timor Telecon telephone had a flat battery. So he used my landline to 'phone his office to check that my landline was working! Doh! After ascertaining that my landline was indeed working he told me that the problem was probably with the Timor Telecon main frame (yep) and he would go back and get it fixed. We parted on good terms considering that I was thinking of setting my dogs on him and all Timor Telecon employees and shareholders (especially the bloody shareholders).
After waiting what I thought was a reasonable time (1 hour) with still no internet I 'phoned 'customer support' again. I was again told that a 'technician' would arrive in 'around 3 days' again! Aaaaarrrrrgggggghhhhhhhhh! This on a Friday evening and Saturday and Sunday were not part of the 3 days.
So, later on the Friday evening I 'phoned 'customer support' again, mistakenly thinking that as it was a 24hour service they might not be so busy at that time of night and that I might get a bit more satisfaction. Wrong again. The wanker on the end of the line laughed at me and then hung up!
Monday morning, 1135am, and I was advised to buy an electricity stabilizer. So I did. Plugged it in. Still no internet. The 'technician' then told me the problem was probably with Timor poxy Telecon.
Maybe we will get it fixed today Mister. Fat chance.
Well, hush my mouth and slap my wrists. At 5.30pm the internet just magically reappeared and I was online. Hooray!
Fuck 'em though. I'm still posting this.
....
Posted by fat old sod at 10:37

For Timor Telecon read Telefonica Spain, we get the same service every time, guy turns up in 3 days, tells you its your fault, you phone again and again, its always the telephone connection outside on the telegraph pole....every time the wind blows the connection goes down, as for those power thingies, I think somebody here has the monopoly! Online at the moment but don´t hold your breath. Micia